A Problem Too Big to Solve?

This post will be the first in a series regarding refugees, primarily focusing on the situation Europe is facing.

Over the past few years the numbers of people groups moving across the face of the globe has consistently been growing.  For Europe the peak numbers arriving was in 2015 when the continent took in over 1 million refugees.  In the years 2016-2018 the number of people fleeing to Europe was close to another million people.  People are still coming day after day now in 2019.

This past week I had the privilege and challenge of going to the Greek island of Lesbos where the Moria Refugee Camp is located.  The camp was erected in 2015 with the plan of housing up to 3,000 people temporarily before they would be relocated to another European country.  Unfortunately, that number grew as people continued to cross the Aegean Sea from Turkey and an equal number were not being relocated to the mainland.   At one point the camp hosted close to 10,000 people! 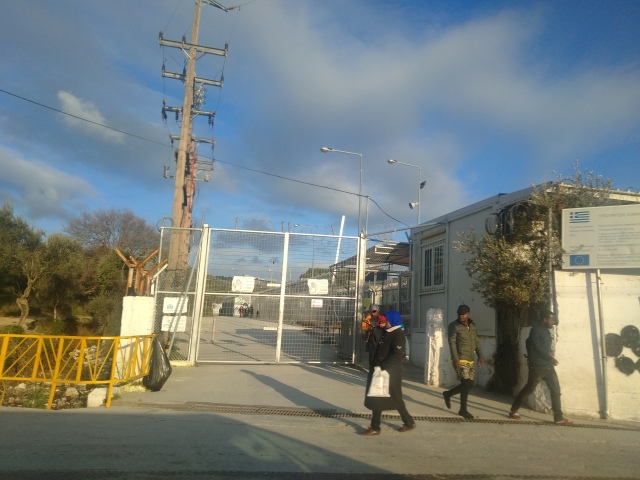 The entrance to the Moria Refugee Camp

There are five main islands in Greece, hotspots, where refugees are being held for processing.  This does not include camps on the mainland or in other European countries.  The map below gives an idea of the magnitude of the issue at hand in Greece alone.

In early 2016 it was apparent that something had to be done to curtail the numbers of refugees coming into Europe.  On 18 March 2016, the EU and Turkey adopted a non-binding document commonly known as the EU-Turkey deal, designed with the sole purpose of deterring refugees from arriving to Europe.  It basically was a swap policy–the EU would pay Turkey up to 6 billion Euros for helping hold the flood of people back from coming across to European countries.  In politicians minds the deal has been a success but the situation on the ground tells a much different story:

“People are in absolute despair. The reception conditions are still catastrophic. People will end up living in tents or 25 people in one container, including children that are getting sick again and again and again because they don’t have enough fresh air and they are not protected. Parents can’t keep their children clean and healthy. Hundreds of people have to use the same toilets or shower that are not being adequately maintained. There have been some improvements, but we still have double or more the capacity of Moria,” according to Louise Roland Gosselin, Médecins Sans Frontières’ Head of Mission in Greece.

Moria is the most crowded hotspot in the Greek islands of the Aegean. In total, the islands currently hold more than 13,500 refugees, while their capacity, in hotspots and other facilities, is less than 9000. Lesbos hosts more than 7,400 people, 5,400 of whom live in the hotspot of Moria which has a capacity of up to 3000.  Outside the official camp is the unofficial “jungle” of Moria where people have erected makeshift living situations from tarps, tents, pallets and cardboard. According to the website OpenMigration, “Riots and violence are constant in almost every hotspot of the Greek islands, but mainly to those that are way over their capacity. After a riot broke out recently in Moria, MSF, who keep an emergency clinic outside the camp, treated 20 people including a six month-old baby who suffered from tear gas inflammation and panic attacks. But riots is only one side of what is happening to Moria. The most devastating consequence of the deal is the effect it has on people’s mental stability: MSF have characterised the conditions on the Greek islands as a mental health emergency.”

So, these are just some of the complex issues involved in the current refugee crisis at Moria and other locations.  What are the avenues to address these problems?  Are they too big to solve?  In a word, for today’s governments, YES!  Between prejudice, corruption and the overwhelming issues it is impossible for man.  However, with every challenge there is an opportunity.

This is where the CHURCH must step in!  We learn throughout history that God uses four main ways to get His “good news” to people:

At the present time God is allowing those who have never had a chance to hear the gospel flee to places where the gospel can be heard.  The CHURCH must be present in these locations to serve, love, express hope and comfort those who have suffered so much!  It’s not a question anymore of access…they are here, now!  They are in distress and only the CHURCH has the people and resources to give what is necessary!  The CHURCH must act–that means us, you and me and other members of the body of Christ.  Look for ways to become involved, advocate for the “stranger” and mobilize others to do the same.  We have a choice to obey…or not…but the Scriptures are clear about what our Lord wants from each of us.

Our team of two Americans, two Brits and 3 Romanians who served at Moria

About The Jollys' Journey

We are Dave and Beth Jolly, media trainers and consultants with Reach Beyond, assisting ministry partners in the Europe/ Eurasia region. Our blog is a more intimate look into our journey through life as we share with you the good, the bad, and the ugly of serving in a post communist region of the world. Through consulting and media training, our passion is to help nationals develop creative ways to positively influence their local communities. Our friends describe us as insightful, purposeful and loving, but we just think of ourselves as being given unique gifts and experiences which allow us to develop relationships through training and mentoring. We have a lot of fun along our journey too! Subscribe to our blog to receive weekly updates, along with pictures, stores and even an occasional recipe! Read the rest of our story (link) or check out our favorite posts and pictures (link).
View all posts by The Jollys' Journey →
This entry was posted in Uncategorized. Bookmark the permalink.

This site uses Akismet to reduce spam. Learn how your comment data is processed.